Guard Me Sherlock is a dating sim app that revolves around the world of Sherlock Holmes and his acquaintances. Characters from the original story that were added include Dr. John Watson (partner), Mycroft (Sherlock’s brother), Moriarty (Sherlock’s sworn enemy) and the great detective himself, Sherlock Holmes. This review revolves around the story of Mikah Hudson; a male version of Mrs. Hudson, who in the original Sherlock Holmes books is the landlady of 221B Baker street. In the stories of the previous characters mentioned,  Mikah is a secondary school student who is Sherlock’s landlord. Being a school boy, he is the youngest of all the characters in the game and doesn’t serve any other purpose besides being a secondary character. However, due to his adorable personality, Mikah’s story release was highly anticipated. Since the readers were curious in seeing an older, more mature and manly version of Mikah.

On with the review: SPOILERS

In the first chapter, we find out that the story takes place six years after we meet Mikah, who at the time was only a student. Now, a college graduate, Mikah is all grown up and is tired of playing the ‘caring younger brother’ to us. It takes quite a while for anything serious to happen. Like around 4 chapters. Which doesn’t sound as much, 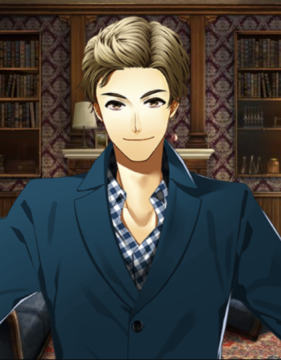 but for a game that’s only 10 chapters in total, that’s quite a lot. There’s really nothing much to say regarding the first four chapters except for a few things to take note of: 1. The fact that there’s a very slow and weak build up between us (the protagonist) and Mikah (our chosen to be lover). 2. Similarly, throughout this time, we find out from Sherlock and Watson that they are aware of Mikah’s deep feelings for us. For instance, in chapter two while discussing Mikah’s different career options. They deduce that all of Mikah’s career path decisions were influenced by us. As Sherlock puts it, “..he only wanted to be a doctor was because he was going through puberty and he was experiencing the special sort of ‘curiosity’ that comes with the territory.” and later implying that it was to learn how to please a woman by saying, “He was determined to get *me* fall for him that he tried to learn the secrets to seducing a woman from you.” Which is hilarious! Another example would be Watson saying that Mikah was only interested in being a Pastry Chef because we have a sweet tooth.

Chapter five is when we finally get to see some action. This entire chapter is Mikah coming home drunk and confessing his deep rooted feelings for us. After which we reciprocate and things start to heat up. My thoughts throughout the whole things was, “Oh no!” Mikah’s scene are pretty steamy and it’s very clearly implied that something serious went down under the sheets. Everything is going well in that regard until suddenly they flash back to Mikah’s younger self. A kid, in the middle of that scene asking if I’m happy with what was happening..? Ummmm… what? Then actually waiting for a response from us. Replying good and I’ll make sure to keep u happy and shower u with love… the young secondary school kid said that… nooo disturbing. It completely removed me from the sexy vibe we were in. I was slightly emotionally scarred from that. Just for reference here’s a pic of young Mikah. 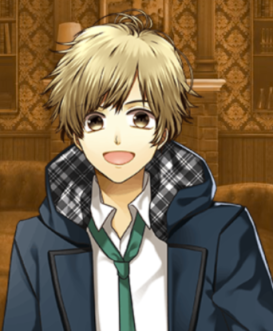 Yup he looked that young. The chapter ends with us thinking, “Just as Mikah said I would, on that night I really did go on to experience all of his six years of pent up passion first hand.”

Chapter six is where the plot resumes. Some notable moments include Mikah confessing his jealous feelings of Sherlock and refuses to receive any help from him because of it. In this chapter, we also make our relationship public to our friends which causes Sherlock to go into shock (hint: Sherlock hasn’t confessed his love for us in this route). Both Sherlock and Watson are upset over this until the very end of the story.

In chapter 7, things go back to being pretty steamy between us. Unlike our relationship with the other guys in the different routes. Mikah is the most of the males to voice his ehm.. desires so out in the open like this.  In one example, as we are both discussing  my liking of Mikah’s disguise as a police officer, he responds, “Then I guess this doesn’t make for such a bad date then. If you want I can wear this to bed too.” With us replying,  “I’d have to put a naughty policeman like that in handcuffs, now wouldn’t I”. Which is a plus obviously. It’s kind of weird though since throughout the past dozen routes he’s only ever been the cute innocent child. Suddenly he’s turned into this sexy and open man.

Is filled with sweet moments. Notably the time Mikah takes us to a hill overlooking the beautiful scenery of London at night. He tells us about his past and how this used to be a sad place for him. But now thanks to us it’s filled with beautiful memories.

We  find out that Mikah is quite mischievous. He used to use his childish charm to get closer to us such through faking his fear of the dark just so we get to hug him. Or pretending to be our little brother so he can stay close to us and get to know us better for his advantage. Yikes

Another point supporting my earlier claim of his naughtiness. In this chapter he confesses that he used to fake falling asleep while resting on our shoulder just to get closer to us. That even as a kid he was deeply in love with us and to quote him, “..even as a kid, a man is still a man.”

It’s soo sweet. We get to spend alot of time together. This ending is set several months after the final chapter. In it we find out that he finally chooses a career path, which I don’t like at all. It feels like it’s a waste of his potential to be honest. As we are enjoying our picnic together, Mikah asks if we can make a family together. SWOON! Then we end up kissing for  a while in front of people. Lol! I got goosebumps throughout the whole thing. It was a lovely ending to a lovely story.

All in all, I think it was a good route. It wasn’t boring at all. It was very interesting to see this grown up side of Mikah. Finally, years worth of pondering of how he will turn out to be is over. It’s a very sweet route, and charming. Mikah is a lot more outspoken with regards to romance which I believe, is because he was forced to hide his love for six  long years. He is very patient and smart. Mischievous, let’s not forget. To be honest, even though the writers tried hard to make us see him in a new light, it’s still slightly cringe worthy every time he did something mature. But still, even though I’m not a fan of dating someone who is younger, I would definitely give Mikah a chance. I recommend this route to anyone but only after you’ve read the other characters route just to get a feel of how Mikah was as a young boy who was hiding his secret crush from us.

Another notable point:  Towards the end of every chapter there is usually a preview for the next one. These introduction are pretty hilarious! And are worth a few laughs. As they involve Sherlock and Watson discussing topics and bantering in typical sherlock-watson fashion.

Mikah’s Advice: “If you keep hoping and believing, you’ll get there. Just like how I did!”

This is a true story of hope and never losing faith!