For all you Manga Lovers out there. I present to you this weeks Manga Review, Ookami ni Kuchizuke 1! Wow is this one crazy. So much stuff happens that I could barely keep up! It makes sense, since I believe the title translates to My Boyfriend lies like a fox! However, there is so much more than that! 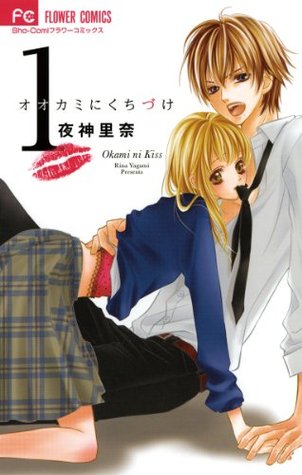 My name is Takahashi Akane. I found a good boyfriend. His name is Kurotsuki Yuito. But he lies like a fox. But…aren’t lies the beginning of love?! This is the first volume of two.

Story: Akane has three younger brothers that she has to take care of ever since their mother died. Between school work, errands and taking care of the family, she rarely has any time for herself. This has led to her being considered as an old unattractive woman even though she is still in high school. Naturally, due to this reason, she doesn’t have any friends or a boyfriend. One day she meets Kurotsuki, who is her student body president. However, she is the only one in school who knows about his double life. They end up faking their relationship in order to keep that a secret. As they spend more time together, Akane starts to develop strong feelings for him. Only to find out that he is indifferent and just using her for revenge against his father. They’re relationship is constantly going up and down due to his lies and secrets. After a certain incident, Kurotsuki has a discussion with his brother where it is revealed that he has deep feelings for her but he is still unaware of it himself.

In the last chapter, it is revealed that Midori, her brother, is actually in love with her. Midori is a few years younger than she is and has always had strong feelings for his sister. This explains why he was angry and unaccepting of Akane’s relationship with Kurotsuki.

Characters: Akane is a replacement mother for her family. She is strong willed and smart. Akane is outdated in terms of fashion and is constantly mocked for it. She loves her family deeply.  Kurotsuki, is known for being the perfect and well behaved student body president. However, he has a dark secret. He is constantly lying and hiding things from Akane which causes some friction between them. Midori, is Akane’s brother who is in love with her. He pretends to be a jerk to her in hopes that one day she will end up crying and asking for his help. That way, it gives him the opportunity to sweep in and save the day. Just so he can use that to make his feelings for her known.

Now, I will leave you with a few snippets of this love story.

To join, link up below with the URL to your blog POST (not your blog), your name and your email (which will remain hidden). Then bounce around the Linky!
Click 👇🏻

What did you think of this post, do you enjoy manga? Did you like this one? Or do you have recommendations? Lets chat, don’t worry, I don’t bite. ^^