“Smith Hamilton was my older brother’s best friend. And come tomorrow night, he wouldn’t know what him him.
The feminist inside me beat on her chest and let out a battle cry.
I was doing this. I would make Smith my bitch.
And zero fucks would be given.”

Smith Hamilton has it all—he’s smart, good-looking and loaded. But he remembers a time when he had nothing and no one, so he’s not about to mess up, especially with his best friend’s little sister. That means keeping Evie at arm’s length … even though the once pesky little girl is now a buxom bombshell. A sexy blonde who pushes his self-control to the limit the night she crawls into bed with him.

Evie Reed knows she’s blessed—with an exclusive education, a family who loves her, and a new job managing social media for her family’s lingerie company. But she wants more, like a reason to wear the sexy lingerie herself. She has just the man in mind to help with that. She’s crushed on Smith forever. Surely tricking her way into his bed will force him to see her in a new, adult way.

I’m really loving this series!! Where was it all my life!! I think this has become a new favorite trope for me.

Again, dual POV, which I LOOOOVE. Anytime authors have both perspectives, its a win for me. Now, the plot line is slightly similar to The Room Mate, but… the characters are different.

Evie is a strong feminist who isn’t afraid to ask for what she wants. She is always voicing her opinion and fighting for what she believes in. Which is a huge change from the usual female protagonist stereotype. 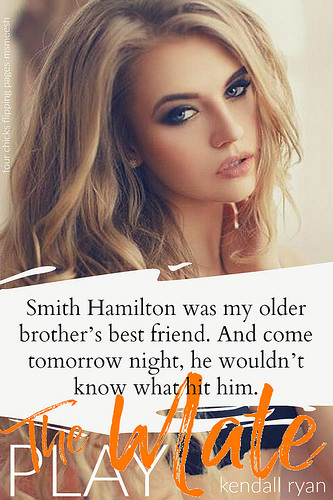 Smith is hilarious. In a sassy way. He is constantly teasing Evie. Not to mention, him being the first guy in any book that I’ve read who actually knows what to do. And behave like an actual grown up. He faces any problem head on and doesn’t waste too much time worrying and playing around.

So, do I recommend this?
Yes, Yeees, a thousand times YES!! You need to read this whole series. Now, if you’ll excuse me, I have the sequel to get into.