Who is the Inventor, and what does he want with the all-new Ms. Marvel and all her friends? Maybe Wolverine can help! If Kamala can stop fan-girling out about meeting her favorite super hero, that is.

“Why are kids like me always being drafted into wars we didn’t start?”

Who is the Inventor, and what does he want with the all-new Ms. Marvel and all her friends? Maybe Wolverine can help! If Kamala can stop fan-girling out about meeting her favorite super hero, that is. Then, Kamala crosses paths with Inhumanity — by meeting the royal dog, Lockjaw! But why is Lockjaw really with Kamala? As Ms. Marvel discovers more about her past, the Inventor continues to threaten her future. Kamala bands together with some unlikely heroes to stop the maniacal villain before he does real damage, but has she taken on more than she can handle? And how much longer can Ms. Marvel’s life take over Kamala Khan’s? Kamala Khan continues to prove why she’s the best (and most adorable) new super hero there is! Wolverine! Yay!! We meet the Wolverine in this one! Like I mentioned in the previous review, Ms. Marvel is my first comic book in the Marvel Universe. So I was super excited to see him!

Their interactions with each other is hilarious! He makes a cameo in the first half of this volume and helps out Kamala in her mission. He is funny in the I’m not trying to be funny kind of way.  Love it! 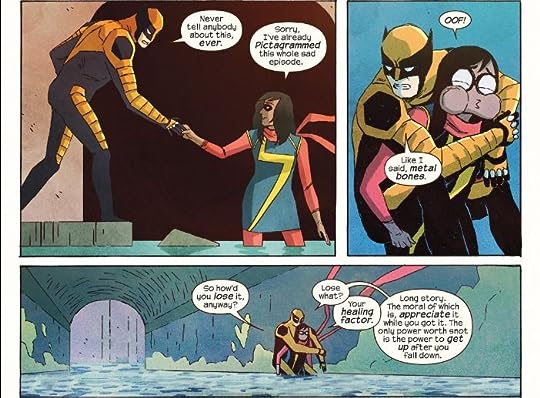 Thanks to Wolverine, we meet this weird red headed lady who is beautiful! I have no idea who she is, but please don’t attack me since I REPEAT, this is my first book in the marvel universe!! 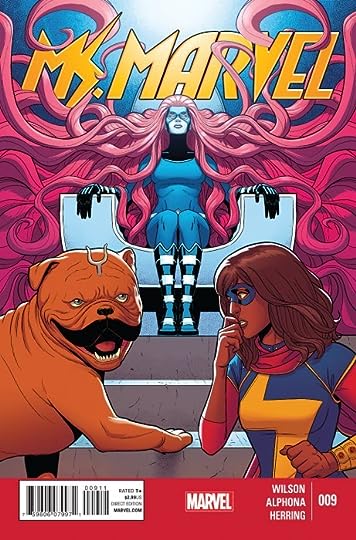 Also, we get the cute doggy!!! Pictured above!! I love him soo much! Captain America shows up for a few pages as well. Basically, this volume acts as a formal introduction into the superhero universe. Where the first volume, was an introduction to Kamala herself. 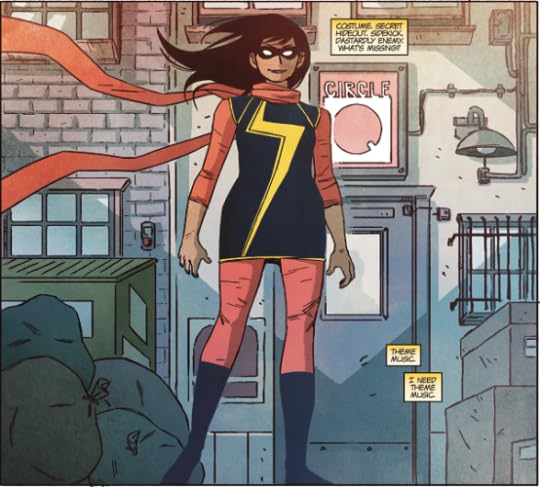