When her dad gets hurt in a freak accident on Friday the 13th, Kerri is sure she’s to blame, but then a boy shows up wearing her father’s old sweatshirt, and Kerri’s luck suddenly does a 180. Convinced that Connor Murphy is the talisman she needs to change her fate, Kerri begs him to be there for her 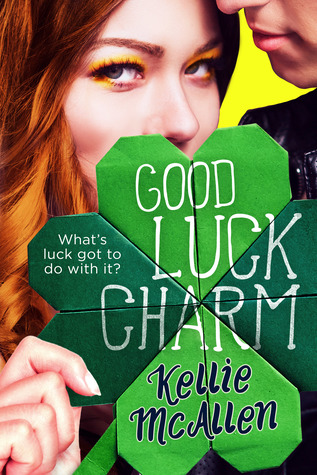 Basketball star Kerri “Killer O’Connor” knows she’s bad luck, and she’s tried everything to keep it from ruining her life — a rabbit’s foot, a horseshoe, her dad’s lucky shirt — she’s never without one. When her dad gets hurt in a freak accident on Friday the 13th, Kerri is sure she’s to blame, but then a boy shows up wearing her father’s old sweatshirt, and Kerri’s luck suddenly does a 180. Convinced that Connor Murphy is the talisman she needs to change her fate, Kerri begs him to be there for her while her dad is recuperating. Connor doesn’t believe in luck, but he’d do anything to win the girl of his dreams, even if that means spending all his time with Kerri.

Connor never expected to fall for the kooky girl with the crazy superstitions, and Kerri’s convinced that Connor wants someone else. But when luck turns to love, can Connor convince Kerri that he’s more than just her lucky charm?

It’s been a while since I read a YA contemporary romance, and now I remember why. Before I get into it, I’m going to start with the positive points first. The cover is gorgeous! The girl is soo cute! And the overall vibe is simply perfect! I know that you’re not supposed to judge a book by its cover, but in this case…you can’t help it! Right!? I can’t be the only one that liked it!

Not to mention, I got this as an audiobook for free by the author after it came out! I mean, why wouldn’t I!? It looks promising, right? Let’s also not forget, Kerri, the main female protagonist. She is strong, athletic but puts on makeup! Which is major, as we know that authors usually make sporty girls only tomboys and nothing else! It’s also refreshing to see the main female lead being confidant, outgoing and having a wonderful sense of humor. Conner, the male protagonist, is smart so is described as a little nerdy, but isn’t left as a total outcast or uncool. Which is also a much needed new and fresh perspective. Overall, the characters are wonderful and interesting to follow.

My issues with this book lie in Kerri’s personality. She is selfish, spoiled and way too demanding of other people. She kept hounding Conner, a guy she just met, to help her with her chores, cook, school work, job interviews, fix her car and even visit her dad at the hospital. Which he has nothing to do with! And when he refused her, she went on the full on defensive and wondered why he would say no?! She described him as ‘bailing on her in her time of need’…what?

I understand that she is a little freaked out over her tremendous bad luck and that it is a huge part of who she is. But this is too much to be believable. She literally spent the whole book bossing him around. And them stressing over how he had the heart to say no to her. What?!

This got really close to getting DNFed. Too close! If it wasn’t for my resolution to never DNF a book this year. I think this review would not have existed.