Innocent blood has been spilled on the steps of the Council Hall, the sacred stronghold of the Shadowhunters.

“Faith isn’t never having any doubts; it’s having what you need to overcome them.” 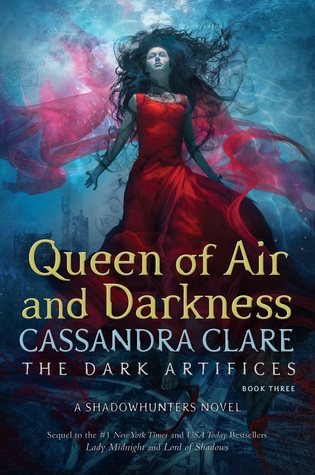 Innocent blood has been spilled on the steps of the Council Hall, the sacred stronghold of the Shadowhunters. In the wake of the tragic death of Livia Blackthorn, the Clave teeters on the brink of civil war. One fragment of the Blackthorn family flees to Los Angeles, seeking to discover the source of the disease that is destroying the race of warlocks.

Meanwhile, Julian and Emma take desperate measures to put their forbidden love aside and undertake a perilous mission to Faerie to retrieve the Black Volume of the Dead. What they find in the Courts is a secret that may tear the Shadow World asunder and open a dark path into a future they could never have imagined. Caught in a race against time.

Emma and Julian must save the world of Shadowhunters before the deadly power of the parabatai curse destroys them and everyone they love.

No, No, No, NO.
Just NO.
Guys, people.. someone… send me an ambulance. Cause I hated this book and that fact is killing me. Can you all effing believe that Queen Of Air & Darkness now holds the record for my LOWEST RANKING book in the SHADOWHUNTER universe. Nay! It holds the LOWEST ranking book in ALL of my favorite authors and book series ever!?!

Like I genuinely can’t believe. This book was soo bad that if Cassie wasn’t my favorite author, I was going to DNF it. Yes, that bad.

“Sympathy is common. Knowing the exact shape of the hole someone’s loss leaves in your heart is rare.”

Aaaanyway, I do have some positive points that I’d like to also mention.

“The sky was a road and the stars made pathways; the moon was a watchtower, a lighthouse that led you home.”

Anyway, that about wraps up my review for this whole trilogy. Honestly, my advice is simply skip this series. Just read the summary and jump to the next set of books she published.  Or enjoy my reviews, I talked about the highlights.